George Osborne represents a very particular archetype found in modern politics. Tomorrow’s Budget comes as stories have been circulating about the Chancellor’s leadership ambitions, with a recent bout of sword-crossing with Boris Johnson fuelling the gossip.

But while the Mayor of London seems to have perfected the “loveable rogue” character, Mr Osborne often presents a rather different personality.

Just before Christmas, ComRes tested how the public would relate to a number of leading politicians on a personal level.  The Chancellor scored abysmally on nearly every measure. Forced to choose between David Cameron, Nick Clegg, Ed Miliband, Nick Farage and Mr Osborne, just 2% said they would most like to have a meal with the Chancellor, 3% would most want him to give them first aid treatment in an emergency, and only 1% would most like to spend Christmas with him. In each area, Mr Osborne was a less popular choice than for example Nick Clegg.

But despite these low scores, much reaction to the poll, probably quite correctly, focused on how Mr Osborne would not really mind about all this. Because, of all the politicians tested, Mr Osborne was the public’s most popular choice to look after their financial affairs (18%).

What with the constant emphasis on austerity, this approach appears to be a rule that Mr Osborne has followed with vigour. Part of this may be a pragmatic acceptance of the inevitable: consistently portrayed by cartoonists with axe in hand, he may reason that it is better to be seen wielding the weapon with intent than swinging it aimlessly. It also serves as a useful dividing line with the supposedly hapless Mr Miliband. But with all the talk of ‘tough choices’ and the decision to target benefit claimants, portraying himself as the tough but competent decision-maker appears to be at least in part the choice of Mr Osborne.

He is of course not the first to cut such a silhouette: indeed both Mrs Thatcher and Peter Mandelson are said to be inspirations for the Chancellor. But while such an approach can have its merits, equally it comes with some serious risks.

Crucially however, it also means that Mr Osborne is viewed much less favourably than his Party generally (28%), whereas Mr Cameron slightly out-polls the Conservative Party (31%). While the Conservatives remain less favourably viewed than Labour (31%), they are unlikely to want to risk electing a leader that drags them down further. For good or ill, elections are at base a popularity contest.

Second, Britons are fiercely tribal – they want to know you’re on their side. But when you start dealing in harsh realpolitik and trumpeting the ‘tough decisions’ you have made, there is a risk that those whose interests are disadvantaged by those tough decisions will doubt whose side you are on. 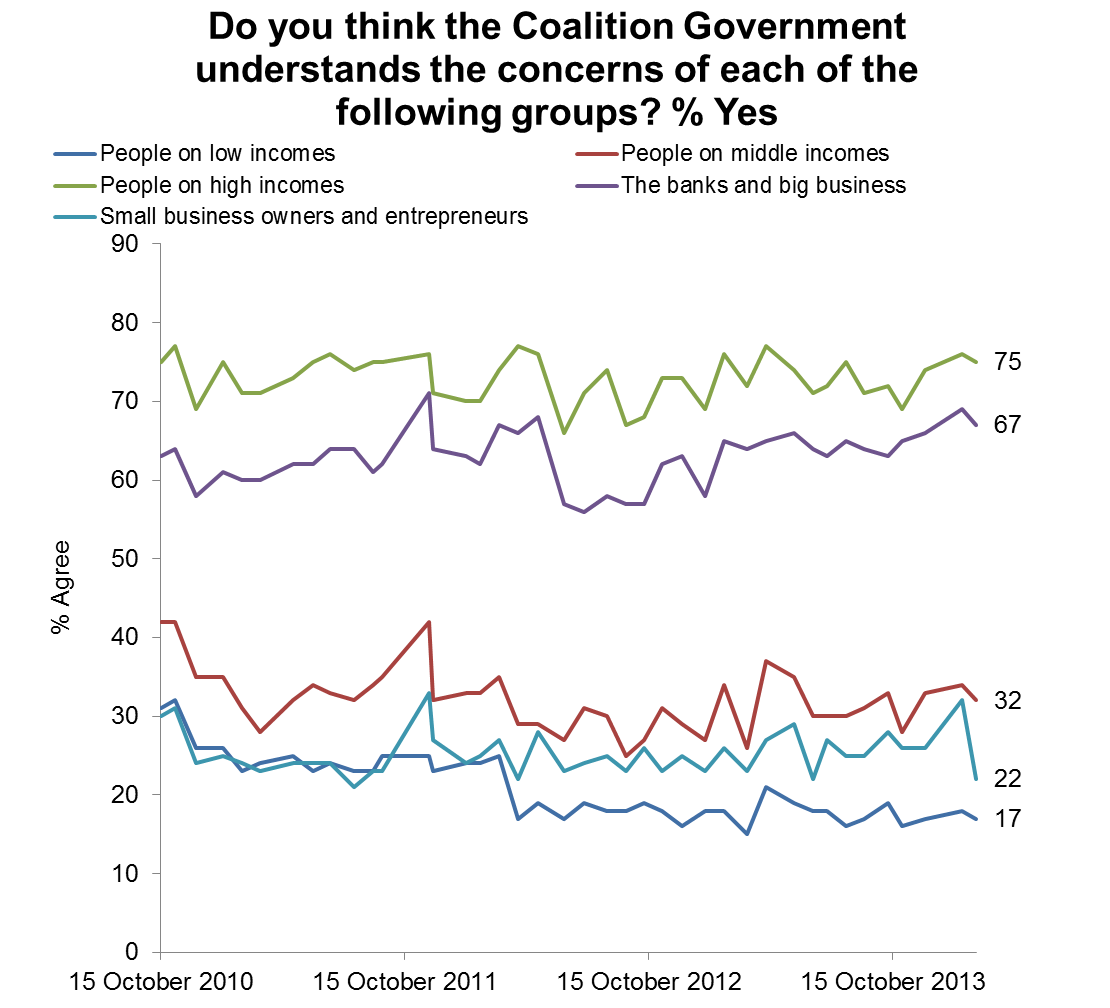 Finally, by focusing on appearing competent, you may end up falling under the false impression that you are winning the argument on this narrow measure alone. Mr Osborne (24%) is consistently more trusted than Ed Balls (15%) on the economy. But despite this, the Conservatives’ economic arguments are not necessarily preferred. Half of Britons (52%) agree that the Government is cutting public spending too much and too quickly – a phrase at the centre of Labour’s economic argument. Just 30% disagree. Correspondingly 52% disagree that the way the government is going about cutting public spending is fair, compared to 30% who agree.

The graph below shows the net agreement for these two statements dating back to 2010 (calculated by subtracting the proportion disagreeing from the proportion agreeing). Again, this trend has been evident for some time and has continued even after economic recovery. Although Mr Osborne is still preferred as Chancellor over his Labour counterpart, the advantages that come with being trusted personally on an issue risk causing complacency that everything you say about it is preferred too. 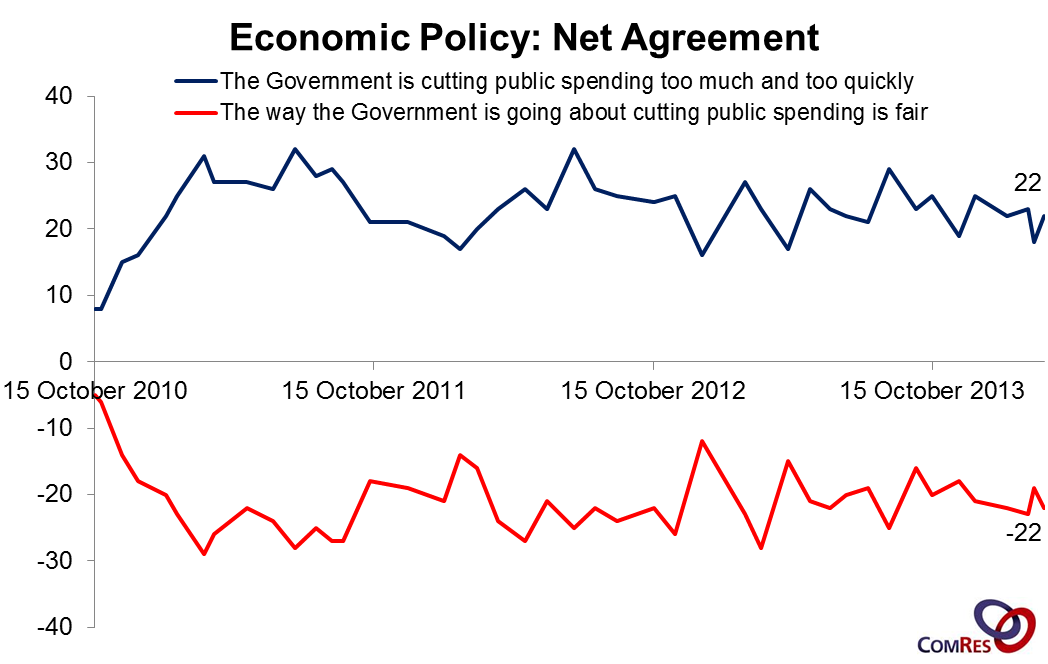 Overall, these three risks – being considered unfavourably; being thought of as on the wrong side; and becoming complacent that being trusted individually means your arguments are automatically preferred – all represent significant challenges for both Osborne individually and his Party generally.

For these three risks, even if not caused by a deliberate attempt to be seen coldly rational and competent, have no doubt been exacerbated by the caricature. Going back to our Christmas poll on preferred politicians, Mr Osborne was selected by just 1% of Britons as their most preferred candidate to run the country. If the Chancellor does hold such ambitions, he might do well to do re-evaluate whether the Machiavellian Prince is really the best character with which to take the crown.

See also: Scottish Independence: would it change the outcome of the 2015 General Election?

Sign up to Pollwatch, a regular update on all the polls and latest news

Our colleagues over at Savanta have launched a daily tracker of UK adults’ opinions, perceptions and behaviours during the Covid-19 pandemic.

Full details of the daily Covid-19 Data Tracker can be found here: https://t.co/2PrJug0D9t

We'll be updating this thread daily 👇

🚨Savanta is running a weekly Covid-19 survey and tracker which offers brands and businesses the opportunity to access and understand customer attitudes and behaviours towards Coronavirus.

Take a look into the first wave of results 👇

In collaboration with Age-Friendly Manchester we are working with @SavantaComRes and equality and human rights charity @EquallyOurs to examine how ageing and demographic change are talked about, with the aim of shifting to a more positive narrative.

Sign up to Pollwatch, a regular free update and commentary on our latest research